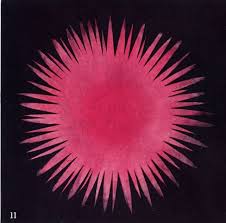 According to Tibetan and Indian Buddhist tradition, Tulpas are thoughts manifestations that take on visible forms and a life of their own. More advanced Tulpas are thought to move beyond form, becoming entities in their own right.

Buddist mythology states that Tulpas were used as an ability to create and control complex and intelligent spirit entities, with some Buddhist masters being able to explore many places at once by manifesting and controlling many Tulpa.

In England in the early 20th century, mystic and activist Annie Beaseant and Chales Leadbetter were part of the theosophist movement attempting to reconnect western scientific methods with mysticism. They took the cartesian notion of an immaterial mind to it’s ghostly conclusion, claiming that thoughts were not just things but apparitions to be seen by those with minds open enough to see them.

Informed by Tulpas and Mesmerism they formulated an approach that combined poetic description of thoughts as immaterial entities that emanate from the person thinking them. They described how different thoughts emanate from their thinker, taking on a life of their own, interacting with one another, combining and merging, with some travelling many miles from their origin.

The authors used scientific language to ascribe particular abstract forms, colours and behaviours to different kinds of thoughts. This was bound within a strict hierarchy, based on the spiritual value of a thought e.g. a selfless thought is a beautiful bright, colour and shape whereas an alcoholic thought is a dull green.

Annie Beaseant and Chales Leadbetter believed that thought forms were real and that their appearance and behaviour of particular kinds of thoughts was the same, no matter who they were emanating from. This project takes inspiration from the visual language and mystical thinking of Thought Forms, not because they really exist, but because it would be more interesting if they did. This project borrows the idea that thoughts could emanate from people and take on an energy of their own, but it rejects the idea that all thought forms are abstract, or that different peoples sad thoughts would take on the same colour, shape and behaviour.

The Flunstellas project takes Beaseant’s idea of thoughts as visible things with their own agency, but explores it practically, by experimenting with new technologies and the theory of decentralised systems.

Whereas Beasant and Leadbetter investigated the idea of thoughts being visible things with an agency of their own through mystical speculation, this project seeks to to explore these themes practically, experimenting with new technologies to describe the interaction of thoughts as parts of decentralised systems.

Next: Artificial Life and Decentralised Systems